The Center for Alternatives to Animal Testing and the Animal-Free Safety Assessment recently held their annual meeting on advancing toxicity testing in the 21st century (TT21C). This informal event provided brief updates on cutting edge approaches in toxicology that have accrued since the publication of the 2007 U.S. National Research Council report on Toxicity Testing in the 21st Century: A Vision and a Strategy.

The meeting is part of an annual series of events that, to date, have been held as satellite meetings of the Society of Toxicology (SOT) conventions. This year, however, with the SOT convention held virtually, it was decided to hold the TT21C meeting virtually as well.

The full meeting (2h34) is available on YouTube and embedded here.

Working with international thought leaders in risk science, Risk Sciences International investigators contributed to the development of the evidenced-based risk assessment framework shown in the… 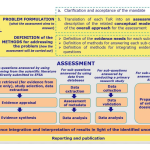 In its 2007 report on Toxicity Testing in the 21st Century: A Vision and a Strategy, the US National Research Council  (NRC) highlighted need for more rapid…